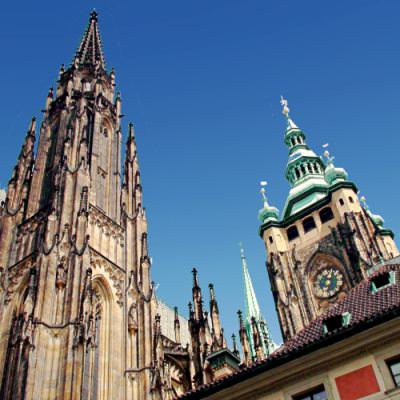 Prague Castle CZE SAINT VITUS CATHEDRAL (Roman-catholic cathedral) – beautiful cathedral built between 1344 and 1929 (yes, it took almost 6 Centuries…) on the place of 2 older churches. Place of coronations of kings of Bohemia, where are safe kept coronation jewels of Bohemia, hidden behind a door with 7 locks. Burial place of the kings and emperors of the Holy Roman Empire (such as Charles IV, Wenceslas IV, Rudolph II, …) and of patron saints of Bohemia – Saint Wenceslas (Václav) in a chapel decorated by semi-precious stones, Saint John of Nepomuk in his silver sarcophagus, Saint Sigismond and Saint Adalbert. Unique Gothic and Neo-Gothic architecture and stain glass windows from 19th and 20th Centuries. Don´t miss the window by Alphons Mucha!

OLD ROYAL PALACE (STARÝ KRÁLOVSKÝ PALÁC) – seat of kings of Bohemia, built on a place of an older palace of Czech princes and kings Interiors – VLADISLAV HALL (VLADISLAVSKÝ SÁL) – built in the end of 15th century by Benedict Ried – and for several centuries the largest secular hall in Bohemia. Look at the unique late gothic vault!

THE STORY OF PRAGUE CASTLE (PŘÍBĚH PRAŽSKÉHO HRADU) – a visit of lower floors of the Old Royal Palace – unique Romanesque and Gothic architecture of the palace; exhibition about the history of Prague Castle.

GEORGE´S BASILICA (BAZILIKA SVATÉHO JIŘÍ) – a relic of the Romanesque architecture in the castle, burial place of some members of the ruling dynasty of Přemyslides such as founder of the church prince Vratislav or his mother Sainte Ludmila (after a legend her daughter in law had killed her). Don´t miss a strange statue in the crypt – a skeleton called Brigitte J.

GOLDEN LANE (ZLATÁ ULIČKA) – tiny houses built directly in the old fortification wall of the castle, according to a legend alchemists should have lived here. But  it´s name comes actually from the goldsmiths, there used to lived here. Inspiring place – also Franz Kafka spent a year in one of these houses.

ROYAL GARDEN (KRÁLOVSKÁ ZAHRADA) – a garden founded in 16th Century by Ferdinand I of Habsburg, who really loved his wife Anna of Jagellon and had built for her a beautiful Renaissance summer palace – Queen Anne Summer Palace (Belvedere). In the garden there is the former residence of Czechoslovak presidents from 1930´or a Ball game hall in Renaissance style, damaged during the WWII.

SOUTHERN GARDENS OF PRAGUE CASTLE (JIŽNÍ ZAHRADY PRAŽSKÉHO HRADU) – from april till October enjoy beautiful views from the gardens, admire the conception of the gardens by Slovenian architect Josip Plečnik.

PICTURE GALLERY OF PRAGUE CASTLE – unique paintings by Tizian, Veronese, Cranach, Rubens, … Some of them from the famous collection of Rudolph II.

MUSEUM IN LOBKOWITZ PALACE – not only a museum of the history of an old Czech aristocratic family, but also paintings by Breugel, Velasquez or Canaletto, music instruments and original manuscripts of Beethoven or Mozart. 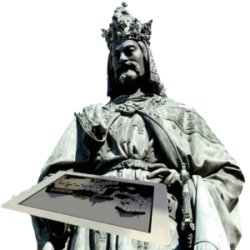 + Guide the World
By using the website EUguide.eu you agree to the use of cookies of this website.Post Views:No