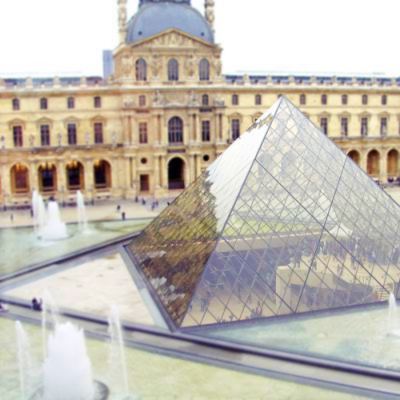 Louvre Museum – Musée du Louvre is one of the biggest museums in the world. The former royal castle of Capet family was rebuilt in Renaissance style by Francis I in 16th Century. In the adjacent Tuileries palace were attacked Louis XIV and his wife Marie Antoinette during the French revolution. Tuileries palace was destroyed by fire and on his place there is a large garden Jardin de Tuileries.
In 1793 was founded the museum and the palace was opened to public. In 1980’s was the Louvre rebuilt and modernized. I. M. Pei designed a glass pyramid covering the main vestibule of the museum.
In the most part of the rooms of the palace you will find lost of pictures, statues and objets of art. In basement there is possible to visit the rest of the mediaeval castle. The upper part of Richelieu wing is furnished in the style of Napoleon III. Temporary exhibitions are held in the Louvre several times a year.

Film location: The Da Vinci Code, Belphégor le Fantôme du Louvre, Bande à part – Band of outsiders, On a volé la Joconde – The Mona Lisa had been stolen and many others.

Tour leaders and guides for your groups in Europe: EUguide

+ Guide the World
We use cookies on our website to give you the most relevant experience by remembering your preferences and repeat visits. By clicking “Accept All”, you consent to the use of ALL the cookies. However, you may visit "Cookie Settings" to provide a controlled consent.
Cookie SettingsAccept All
Manage consent