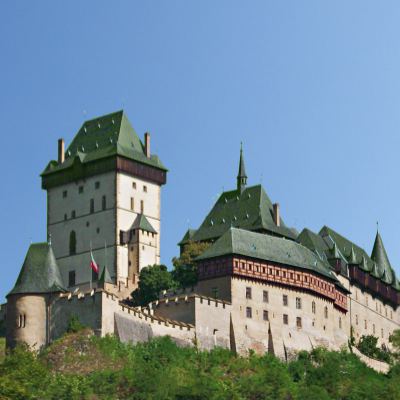 Charles IV, emperor of the Holy Roman Empire and King of Bohemia, founded this Castle in the middle of 14th century on a hill among of the forests not far from the Berounka River about 30 km south-west from Prague.

The building lasted 15 years and the new castle became a place for meditation of the king and the safekeeping place for coronation jewels of the Kingdom of Bohemia and the Holy Roman Empire.
The castle is located on a top of a hill and consists of several parts. Lower (less important place) the burgrave´s palace, then the imperial palace with the king´s and queen´s apartments and a big dining hall, the Marian tower with the church of Our Lady and smaller chapel of St. Catherine of Alexandria. And finally a fortress in the fortress – the donjon (big tower) with the Chapel of The Holy Rood, where the coronation jewels had been safe kept for almost 250 years. The chapel is a real jewel of the medieval architecture. The walls are decorated by semi-precious stones and a collection of paintings of 129 saints, there are used as well as reliquaries because in their frames, there are the relics of these saints.

Note: The usual tours organized by Czech tourist agencies do not include the visit of the Chapel of the Holly Rood. They include just the 50 min guided tour in the imperial palace (tour I) in English or in Czech. The castle is only accessible with a local guide – however you will take an audio-guide, you have to follow the guide (not like in Prague Castle, Versailles or Schönbrunn)!
If you would like to visit the chapel of the Holy Rood, you have to book the tour Nr. II, from three tours, they provide in the castle. The booking you have to do before your visit (it is opened just in summer, every day). The number of visitors of the chapel is limited (12 in a group).