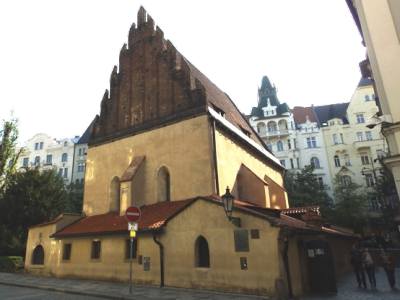 JOSEFOV – the former Jewish quarter – However the ghetto doesn´t exists any more, there is still a lot of interesting things to discover…

OLD NEW SYNAGOGUE (STARONOVÁ SYNAGOGA) – the oldest preserved synagogue in Europe, where the divine offices still take place, was built in 13th century, later was added a gallery for women and in 19th century were the gables renovated. A synagogue linked with famous Rabbi and scholar Jehuda Löw ben Bezalel (called also Maharal) and according to a legend the site, where you can find Golem.

MAISEL SYNAGOGUE (MAISLOVA SYNAGOGA) – originally built in the end of 16th century for the family of Mordechai Maisel (primas – the mayor of the ghetto). Today there is an exhibition about the history of Jews in Bohemia and Moravia till 17th century (crowns for the torah, plans of the ghetto, Jewish guilds, …)

SPANISH SYNAGOGUE (ŠPANĚLSKÁ SYNAGOGA) – probably the most beautiful synagogue in Prague built and richly gilded and decorated in 19th century in Moorish style on the site of the oldest synagogue in Prague – the so cold OLD SCHOOL (ALTSCHUL, STARÁ ŠKOLA, BEIT KNESET HA YESHANA) built in 12th century.

The synagogue hosted an exhibition about history of the Jewish community in Prague, Bohemia and Moravia from 17th century til 1950. You will see here also interesting photographs and documents about the concentration camp in Terezín / Theresienstadt as well as an exhibition of silver objects in the so called WINTER SYNAGOGUE (ZIMNÍ SYNAGOGA).

PINKAS SYNAGOGUE (PINKASOVA SYNAGOGA) – a renaissance building from 16th century built by Hořovitz family on the place of an older house with a medieval mikwe (ritual bath).

Today there is a memorial of Jewish victims of the WWII. On the sides of the synagogue you can read almost 80000 names of the Jews form Bohemia and Moravia killed by Nazis during the WWII.

Don´t miss the first floor! There is an exhibition of pictures draught by children in the concentration Camp (Ghetto) of Terezín / Theresienstadt. Very impressive place…

OLD JEWISH CEMETERY (STARÝ ŽIDOVSKÝ HŘBITOV) – almost 12.000 preserved tombstones but probably 100.000 persons were buried here (several layers of the graves). Tombs of famous scholars Rabbi Löw, David Gans, David Oppenheim,..), the first Jewish noblewoman in Bohemia… and many others – Look at the steles – you will recognize not only the texst in Hebrew, but also lots of symbols…

FORMER CEREMONIAL HALL – This building seems to be very old, but in fact was built in 20th century.  Former seat of Khevra Kadisha the burial society, who took care about the cemetery as well as ill and poor people in the ghetto.

KLAUSEN SYNAGOGUE (KLAUSOVÁ SYNAGOGA) – built in 17th century – today hosted an exhibition about Jewish customs and holidays (Do you know what “PESAH”, “MOHEL” or “KHANUKIYA” means?)

OTHER JEWISH MONUMENTS IN PRAGUE

The largest synagogue in Prague. Beautiful building in Moorish style was founded in the year 1898 – in the year of the 50th anniversary of the reign of Franz Josef I – that´s why it is called the Jubilee synagogue.

SYNAGOGUE OF SMÍCHOV – metro B Anděl, tram Anděl 4, 9 – Today: a depositary of Prague Jewish museum and a bookshop.