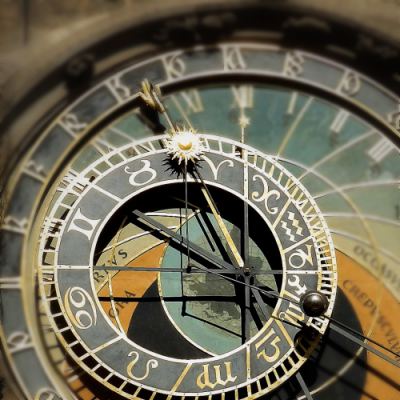 History of the clock

After a legend the clock machine at Prague City Hall is a work of Master Hanuš. His eyes should have been picked when the council men did not want to make him such a beautiful clock anywhere else.
The clock was mentioned for the first time in 1410. It is not sure who exactly created the astronomical clock in Prague Old Town. It was probably Mikuláš of Kadaň or a master of Prague university. The stone decoration is a work of Parler’s family, which built St. Vitus Cathedral in Prague.

In the end of the 15th century was laid a reconstruction of the town hall and the clock, which was made by Master Hanuš z Růže.
In 17th century were added moving wooden allegorical statues and about a century later also the statues of 12 Apostles. In the 19th century Josef Mánes painted the circular calendar.

The astronomical clock Prague was badly damaged during the fights of Prague uprising in the end of WWII. After the war it was renovated together with a part of the town hall. The burned statues were replaced by copies made by sculptor Vojtěch Sucharda. 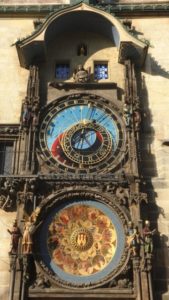 There were changed not just the colors of the clock but also the astrolabe itself.
This year was changed also the copy of Manes Calendar – different colours. Glass windows covering the apostles are shining by new bright colors.

Statues at the astronomical clock: